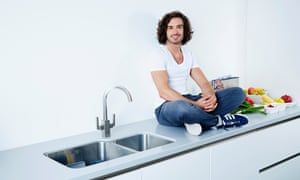 The internet was billed as this great bringer of democracy, the crasher-down of barriers and elites, and then it turned out the opposite was true, and democracy was crashed by a load of trollbots. Cooking, however, really has been democratised. Last century, the window for televised recipes was incredibly narrow: the rules were, you could have a cookery show if you’d had five already. There was a golden ticket for one young person (Jamie Oliver) and one beautiful person (Nigella Lawson), an outrageous dart of fortune, like Charlie and the Chocolate Factory. Now anyone with a phone can film themselves making dinner, and the result is, if nothing else, a true yardstick of what other people like.

And what they like, it seems, is Joe Wicks, AKA @thebodycoach, 2.8 million followers on Instagram, most famous for Lean in 15, dishes in which you cram a vegetable into every crevice, as if you were feeding a fussy but not very acute child. His first love is fitness, rather than food, and his sheer commitment to nutrients is extraordinary. There is nowhere he won’t wedge a cauliflower. Lots of the recipes specifically reference this slyness (“Hidden veggie mac and cheese”) although, surely, if you cooked from this a lot, you would realise there was a pureed butternut squash at the bottom of everything.

But you know what? A lot of it is delicious. It’s an entirely different sensibility from middle-aged chefs who have been cooking all their lives, wondering what difference it makes to use saba or balsamic. The main thing you can taste is wholesomeness; you want to try it on your kids, along with all your other good intentions: taking up basketball, teaching them manners …

Wicks worried a lot in the early days about his delivery – as he said in an interview with Radio 4’s The Food Programme, he started off very monotonous and neutral. This has evolved into an incredibly high-energy, staccato delivery that climaxes on every ingredient (“Add your banana, squeeze in a bit of lime”), like being shouted at under heavy shelling by someone who wants to save your life but has no time to lose. Even much more mellow presenters (I love Rachel, test kitchen manager at @thefeedfeed) feel duty bound to invest every foodstuff with heavy enthusiasm, the way everybody has to sound sonorous and slightly melancholy on Thought for the Day, even when they’re talking about volleyball.

Elsewhere, as straight cooking on TV gives way to competitive cooking (which is too emotional to watch for instructions), internet cooking is experimenting with the opposite: no emotion at all, which is to say, no words. Straight video tutorials, with the odd subtitle. @Modern_Honey, also on Insta, is quite bake-heavy – I’d say only one in four recipes isn’t a cheesecake, although of course I’m exaggerating for effect so divide that by half – but when you do find something you would eat for an actual meal (search for “marry me chicken”, and don’t be repelled by the sight of sundried tomatoes going into double cream), it is extremely restful to watch. The ingredients come together on fast-forward, accompanied by nothing more than jaunty music, like a Disney montage of woodland creatures tidying up.

You may be at the stage in your life where you don’t need to watch a video of a browning chicken breast – a straight recipe will do, and all you’re looking for is something you haven’t thought of. Mob Kitchen is huge with students (I know this not for the 181,000 followers on Facebook, but because it is obsessed with brunch, which is a young person’s game) and basically supplies written recipes with a Spotify playlist. I would have to be pretty committed to the vision before I would listen to someone else’s music choices out of respect for their sweetcorn and lemongrass fritters. The USP is feeding four people for a tenner – which is a ceiling, not a floor. Plenty of the dishes, if you shopped around, would come in at half that, and the Asian section, in particular, is brilliant – wildly inventive, putting perfection over speed without being fiddly.

One more faultline, which people argue over a lot on Twitter: the merits of using pre-chopped, usually frozen vegetables, rather than doing it yourself. Sites such as the Batch Lady are constantly pouring kilos of prepared onions into vats of mince and, I have to say, it depresses the hell out of me.

Cooking for yourself is not really about superior nutrition any more: there are plenty of things in Starbucks with less fat and sugar than anything I make. It’s more about not becoming disconnected from your own pleasure. However, Jack Monroe says give everyone a break and let them buy whatever they want. She, incidentally, would scoff at the four-for-a-tenner formula, being able to bring in dishes at 11p a portion. That’s what the hive mind is best at, I think: cooking on a budget. Which is a kind of democracy.

As the climate crisis escalates…

… the Guardian will not stay quiet. This is our pledge: we will continue to give global heating, wildlife extinction and pollution the urgent attention and prominence they demand. The Guardian recognises the climate emergency as the defining issue of our times.

Our independence means we are free to investigate and challenge inaction by those in power. We will inform our readers about threats to the environment based on scientific facts, not driven by commercial or political interests. And we have made several important changes to our style guide to ensure the language we use accurately reflects the environmental catastrophe.

The Guardian believes that the problems we face on the climate crisis are systemic and that fundamental societal change is needed. We will keep reporting on the efforts of individuals and communities around the world who are fearlessly taking a stand for future generations and the preservation of human life on earth. We want their stories to inspire hope. We will also report back on our own progress as an organisation, as we take important steps to address our impact on the environment.

You’ve read 68 Guardian articles in the last month – made possible by our choice to keep Guardian journalism open to all. We do not have a paywall because we believe everyone deserves access to factual information, regardless of where they live or what they can afford.

We hope you will consider supporting the Guardian’s open, independent reporting today. Every contribution from our readers, however big or small, is so valuable.