Digital payments are top on Google India’s priority list, if one goes by the announcements here on Thursday at its annual event.

At the ‘Google for India’ fixture, Google Pay, the technology giant’s payments platform, launched a host of features and products aimed at getting more businesses and people on the platform.

It launched a ‘Google Pay for Business’, a separate app for merchants and businesses to enable digital payments through remote verification and registration, that can be done “in minutes”.

A demonstration featured a video-based know-your-customer process through Google Duo, its video calling app. With a voice-based assistant taking a shopkeeper through the registration process.

Ambarish Kenghe, director of product management at Google Pay, said Pay for Business was “a free and easy way for small and medium-sized merchants to enable digital payments without the hassle of time-consuming on-boarding and verification processes. We hope these initiatives will help merchants adopt digital payments with more confidence.”

The app was tested by merchant establishments over months in Bengaluru, Hyderabad and Gurugram, said Caesar Sengupta, vice-president of their Next Billion Users Initiative and Payments. The latter is a categorisation of people coming online for the first time.

Google Pay also announced the launch of tokenised cards for debit and credit card holders, a secure way of paying for things by using a digital token on your phone rather than your actual card number.

In January this year, the Reserve Bank of India issued guidelines on tokenisation of debit/credit and prepaid card transactions. Tokenisation involves a process in which a unique token masks sensitive card details, the regulator had said. In lieu of actual card details, this token is used to perform transactions in contactless mode at Point Of Sale (POS) terminals, Quick Response (QR) code payments and so on.

The guidelines also permit authorised card payment networks to offer card tokenisation services to any third-party app provider. Tokenised cards on Google Pay will be coming out in the next few weeks, with Visa cards for HDFC, Axis, Kotak and Standard Chartered banks. Support for Mastercard and RuPay, and more banks, would be added in the coming months.

As part of an early access programme, Google Pay users will be able to use a Spot of popular services such as UrbanClap, Goibibo, MakeMyTrip, RedBus, Eat.Fit or Oven Story.

Taking forward Google’s commitment to the Next Billion Users, it also announced a new effort, termed ‘Jobs’, focusing on entry-level jobs that are not easily discoverable online. “Jobs will be available as a Spot on Google Pay, to help job seekers find and prepare for entry-level positions that fit their needs. It uses machine learning to recommend jobs and training content to help these users prepare for interviews and learn new skills,” said Sengupta.

Using a visual ‘Spot Code’, built into the app, users can log-in, enter their goals, their job interests and build a profile over time. Profiles will be private by default and be made available only to the people and prospective employers a person wants to share the information with. 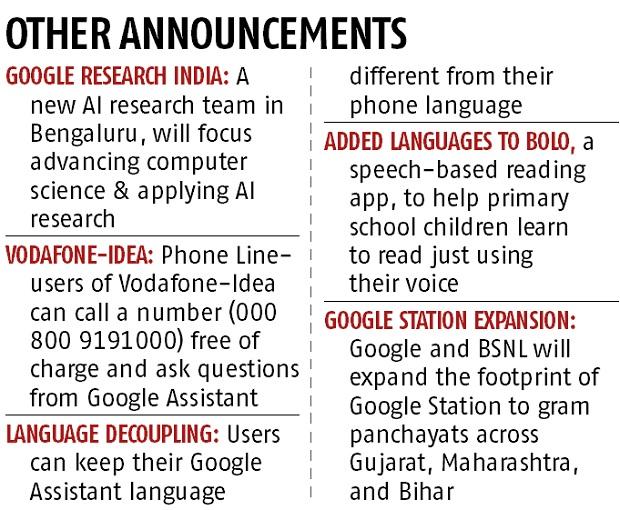 Jobs would also make it easy for them to apply, schedule interviews and engage directly with potential employers.

Sengupta further announced a partnership with the National Skills Development Corporation for their Skill India programme. As part of this, Skill India students will be offered a way to get started with Jobs and find employment opportunities.

Job Spot is being introduced with 24 early partners like 24Seven and Healthkart in retailing, Swiggy, Zomato and Dunzo in delivery and logistics, and Fabhotels in hospitality, with more sectors and partners to be announced in the coming weeks.

On the issue of working with the government on data regulation and issues like data localisation, Sengupta said: “Infocomm is a relatively new industry and governments will have to think about what role they play there, how they want the industry to be shaped and how they want the future to look. Our request has been that government think about it from the point of view of smart regulation. Industry and government should come together and participate in it as one.”