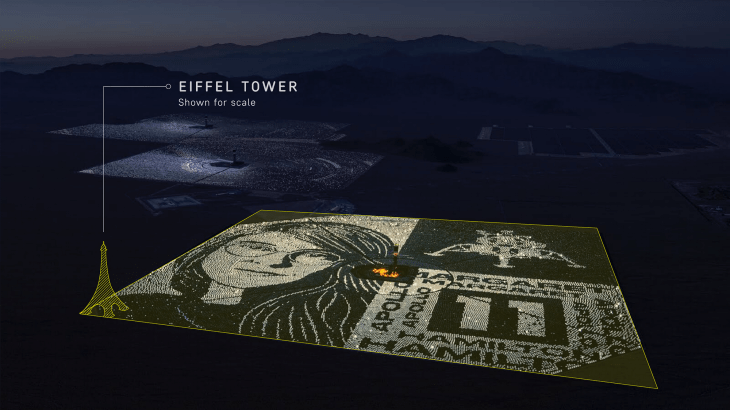 Google  has a number of different celebrations of the 50-year anniversary of the Apollo  11 Moon landing going on right now, but one organized by the Maps team might be the most grandiose in terms of scale and effect. At the Ivanpah solar facility in the Mojave Desert, Google set about creating a huge portrait celebrating Apollo program lead software engineer Margaret Hamilton, using reflective solar panels and the light of the Moon.

The portrait is made up of more than 107,000 mirrors, which cover an area spanning 1.4-square miles, which is actually bigger in surface area than Central Park in NYC — or, for a different sense of scale, it’s an area that would fit more than 200 Eiffel Towers lined up side-by-side. You could spot the image created from as high up as 1,900 meters (about 6,233 feet).

The gigantic image includes not only a portrait of Hamilton, but also her name along with the “Apollo 11” mission title and an image of the lunar lander used to bring astronauts to the surface for the first time. That’s in reference to Hamilton’s key role in ensuring that the Apollo 11 landing went as planned, thanks to her creation of a priority display that provided astronauts with the info they needed despite an overloaded guidance computer near the end of the lander’s trip to the surface.

Hamilton, now 82, recently provided an interview to The Guardian detailing her path to Apollo and her role leading the software team for the Apollo 11 mission.