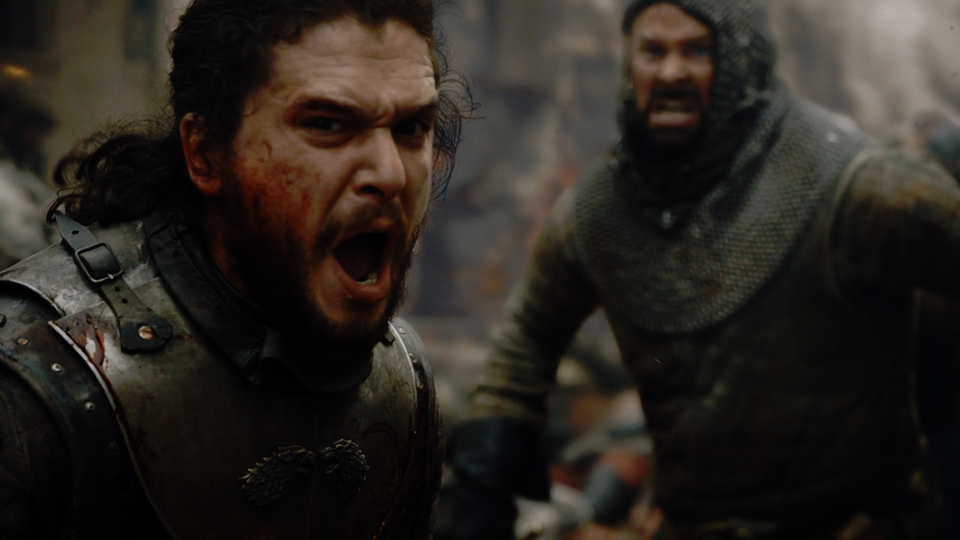 Sunday night’s episode of Game of Thrones was . . . incredible. It’s bound to be one of the most controversial episodes of television ever made. I loved it and hated it and I think it could have been the perfect culmination of everything this show ever set out to do, if only they’d earned it. If only HBO  had taken the time necessary to get to this insane moment of fire and blood.

If only they’d earned this, it would have been perfect. I loved this episode. I was enthralled from the very first frame to the lats. And yet . . . the credits rolled and left me feeling cheated. The abbreviated edition of Game of Thrones was perfect in every way except for the fact that it felt so . . . . abbreviated.

So many stories. So much potential. So many threads on the loom, endlessly weaving. We reach the end without ever quite reaching. This was a magnificent episode of television that never quite earned its magnificence. I’m not quite sure how else to describe it. Like some facsimile of a great story, this was television that had everything perfectly placed, perfectly constructed and blocked out, but never quite deserved the emotional high points.

Tonight’s episode was far more epic and emotionally poignant than the Battle of Winterfell and the half-baked villain of the Night King. Cersei was, in the end, a weeping mother. As Daenerys Targaryen, Breaker of Chains, Mother of Dragons, laid waste to the city of King’s Landing, there was never really any question of who would win and who would die. Drogon burned everything in sight. The real question is what it means now that the queen of ashes has taken the Iron Throne. 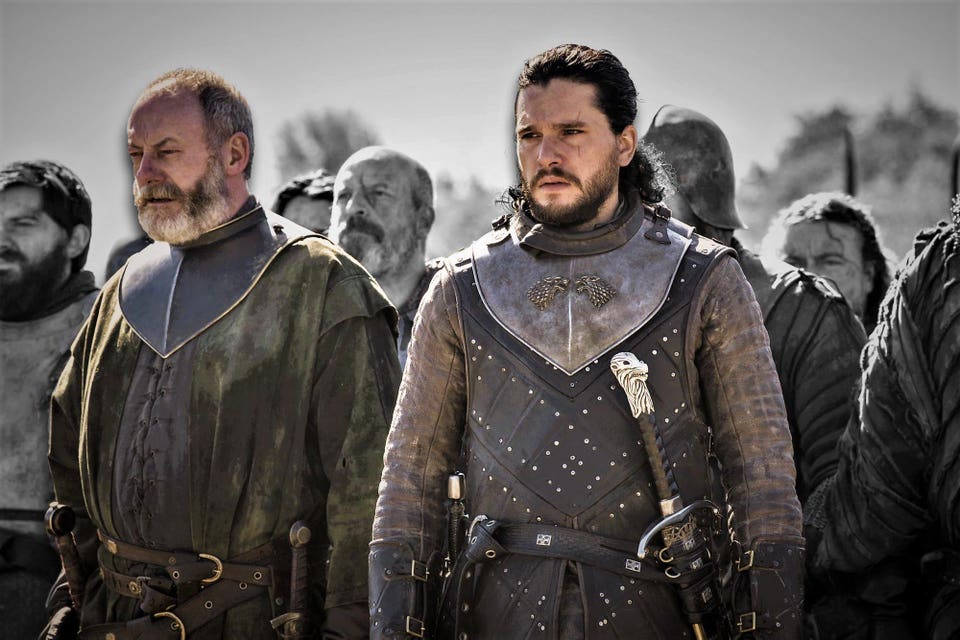 I loved this episode and I hated it.

Tonight, they had to reload the ballista. Tonight, giant crossbows were no match for dragonfire. Poor Rhaegal, if only he’d survived long enough to face this Ironborn incompetency.

This is the problem with Seasons 7 and 8 of Game of Thrones. It’s all just too convenient. It would have been so simple to make this riveting drama.

I was riveted by tonight’s episode. I’m actually quite easy to please. Had they simply built up to this point, had they simply earned this moment of bloodshed and victory and defeat all at once, I would be cheering from the sidelines like any other giddy fan.

Instead, I’m left wondering why Euron ever had a victory. Why didn’t Daenerys burn his fleet to ashes last week? Why did Missandei ever have to die?

I won’t lie. I loved this episode. I loved every moment. I loved Tyrion’s doubt and his betrayal of Varys. I loved that moment when Vary said that he hoped he was wrong. I could feel myself saying the same words, as if Dany was the show, and I was its adviser. I want it to be great. But in the end we all feel like Jon Snow, watching as his queen incinerates the city. I can’t think of a single thing about tonight’s episode that I didn’t love, and yet at the same time it was like a terrible betrayal.

This isn’t how Jaime Lannister should die. Or Cersie. And did we really need a Cleganebowl, no matter how badass it was to watch Sandor leap into his undead brother and send them both to their death? I’m not against it, but it felt forced.

I am so utterly conflicted, dear readers. To come to this point after two decades of fandom. To come to this brutal, bittersweet semi-conclusion to such an epic story . . . I’m not sure what to think. It was horrific and exciting and terrible and action-packed and so unsatisfying and so dramatic all at once. I have no words. I have many words. I am at a loss, and lost, and yet . . . I think I have more to say than I realize. I have some pictures, at least. 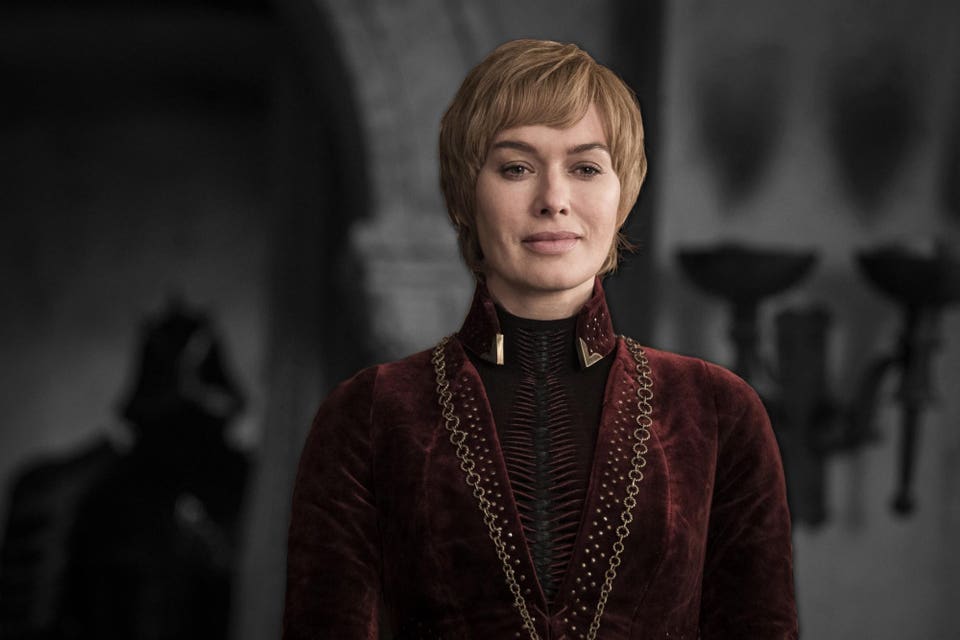 Tonight’s episode was another blockbuster. So much happened it’s almost impossible to wrap our brains around it all at once. Once again, this should have been two episodes, not one slightly longer one.

It began with Tyrion tattling on Varys, after the Spider tried to recruit Jon Snow to his cause. The Spider should have waited. Had it been book Varys instead of TV Varys, he would have waited. After all, once Jon saw Dany go mad with revenge and bloodlust, he would have joined Varys’s coup without flinching. Varys survived many mad kings and queens. Why was he in such a rush now?

Because the show is in such a rush. 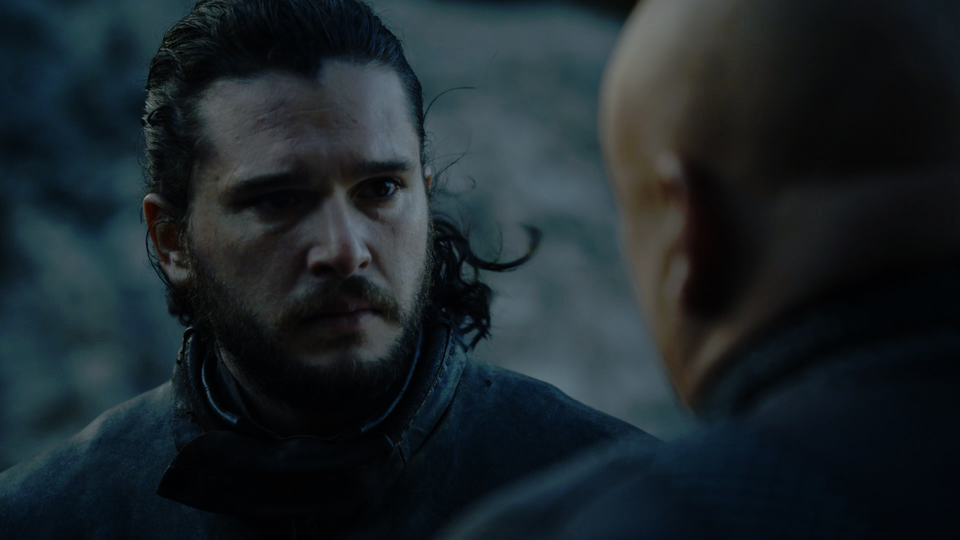 Daenerys wasn’t surprised by the betrayal. She lumped Jon and Tyrion into it, for good measure. Had Jon not told Sansa, she’d never have told Tyrion who would have never told Varys and so on and so forth. Of course, they were all right to doubt her. 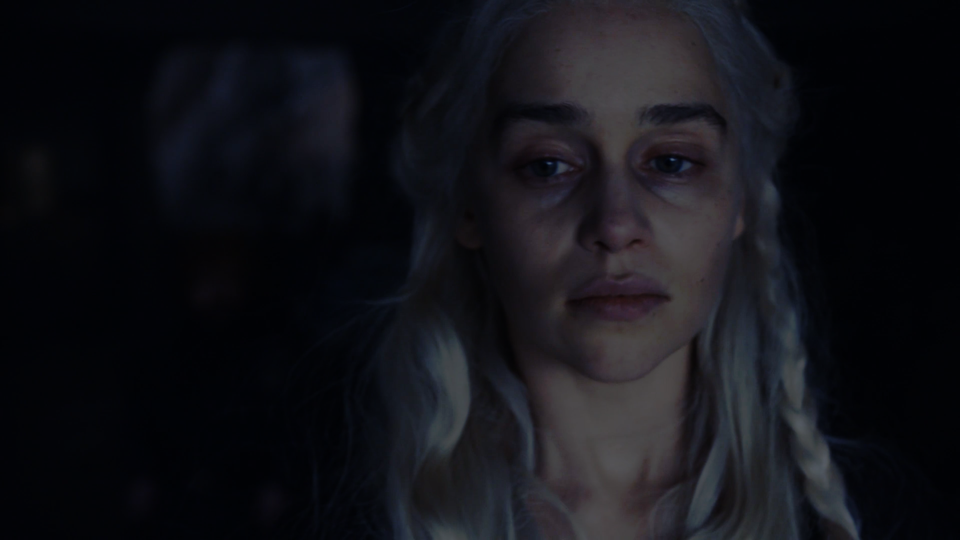 Then Tyrion frees Jaime because it turns out Jaime isn’t going to kill Cersei, and Tyrion wants them both to live happily ever after which, if I may be so bold, would have been better than their fates in this episode (especially if she’d died in childbirth offscreen).

I did really enjoy the Tyrion/Jaime hug quite a lot, however. 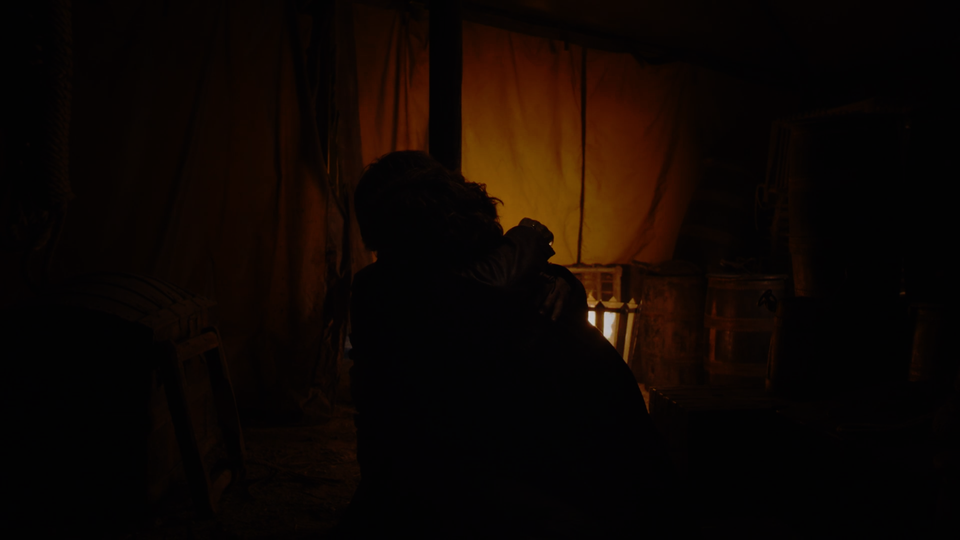 From here we get to the battle, or whatever it is this was. Not much of a battle at all, it turns out. I’m not sure why they even bothered to weaken Daenerys–after all, her Unsullied and Dothraki and dragons and all the rest were as powerful as they needed to be, regardless of any setbacks. 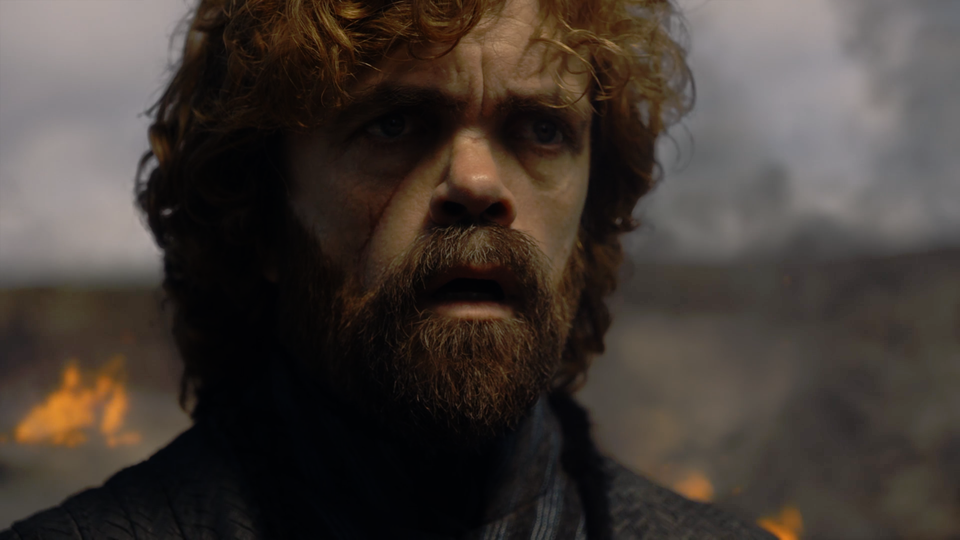 What have I done?

She burns the Iron Fleet without any complications (somehow they’re much worse with those ballista this week) . . . 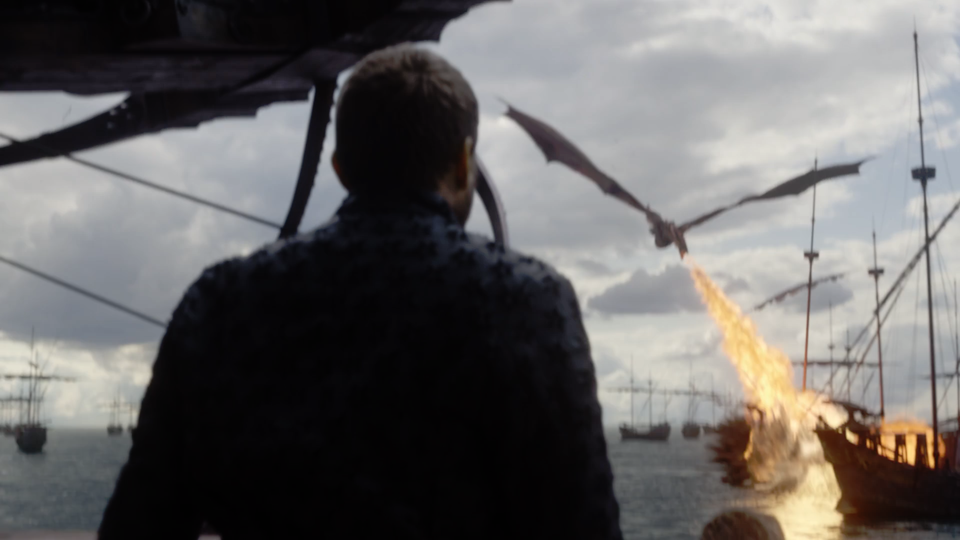 And then she burns down everything else. 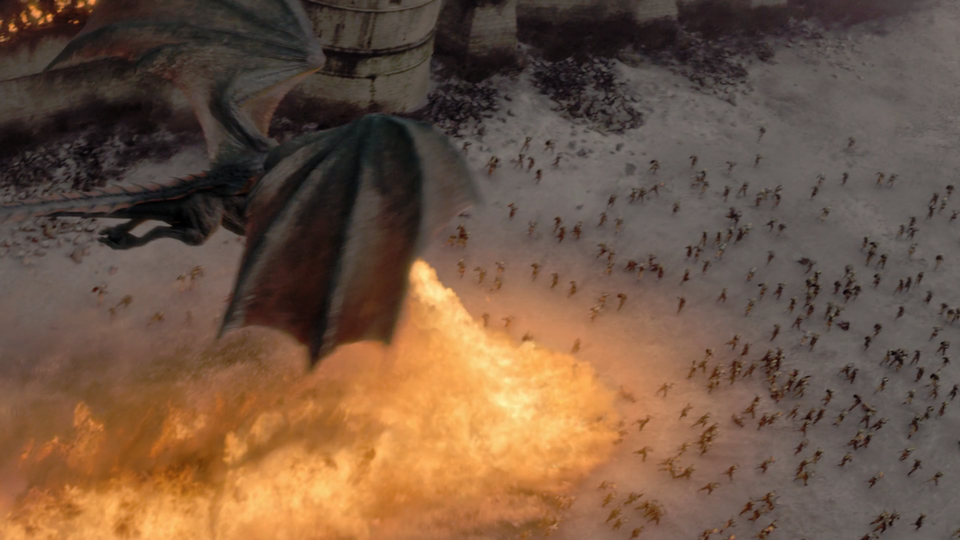 Unchained from any kind of mercy or inhibition, Dany goes back on her promise of restraint. She lets loose, not on the Red Keep or Cersei, but on the city of King’s Landing and all its inhabitants. Her fury is boundless. She is a WMD. If the Night King and his White Walkers were climate change, well Dany and Drogon are a nuclear arsenal. No matter how terrible your enemy may be, unleashing this kind of firepower against them is truly terrible, and we see it in the panic of the peasants. The smallfolk and the soldiers run and they burn. Fear trumps love, after all. 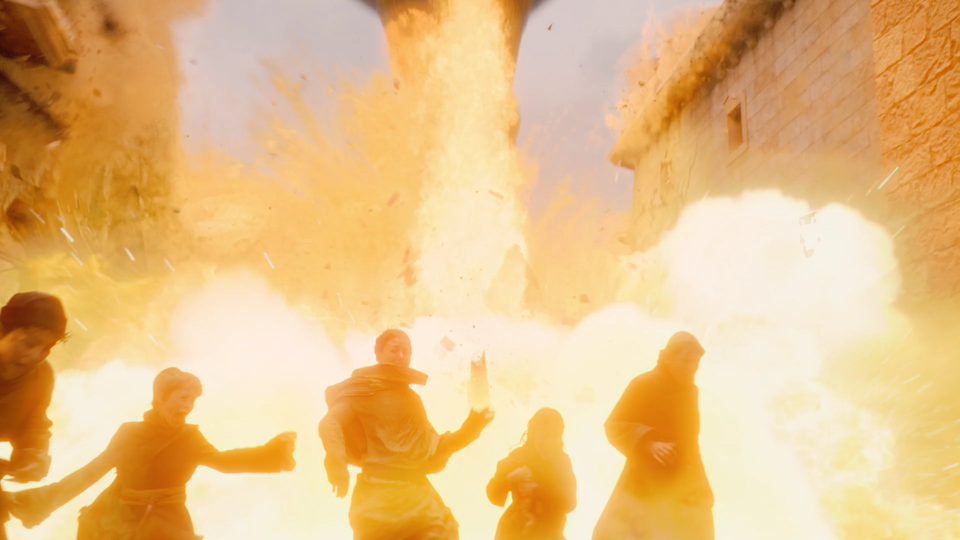 So much happens. 80 minutes. By the Seven, there should have been several episodes leading up to this. What a wonderful release this might have been, if only they’d gotten here naturally.

So much happens in just 80 minutes of television. Jaime and Euron fight to the death, and Jaime wins . . . but then Jaime and Cersei die with no fanfare and no meaning.  It’s all so pointless. And it makes what came before pointless, too. Why did Jaime knight Brienne? Why did he sleep with her? Why did she weep at his departure? What is the point of these relationships if they simply trail off into rubble? Rubble and fire. This could have been the culmination of an entire season of conflict and betrayal and build-up.

I want to love this episode so badly. It was, truly, great television. The music, the cinematography, the acting . . . all brilliant. But a rushed story is a rushed story. 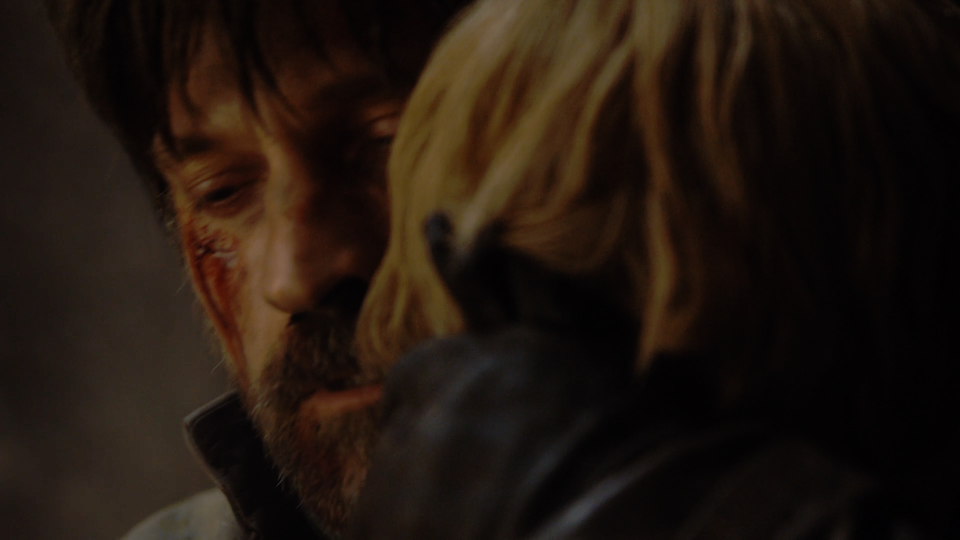 We also got Cleganebowl, at last. I liked it, too. I liked the fight between Sandor and his undead brother, a dog barking at a boulder. It was as epic a fight as any I’ve ever seen. But it felt more like fan-service than something Martin would write. And with his helmet off, Gregor was either Swole Varys or Darth Vader on steroids, I’m not quite sure. Either way, he was no match for Sandor, at least form a storytelling point of view. Sandor was willing to leap to his death, so long as he took the Mountain with him. I’m still not quite sure it was worth it. 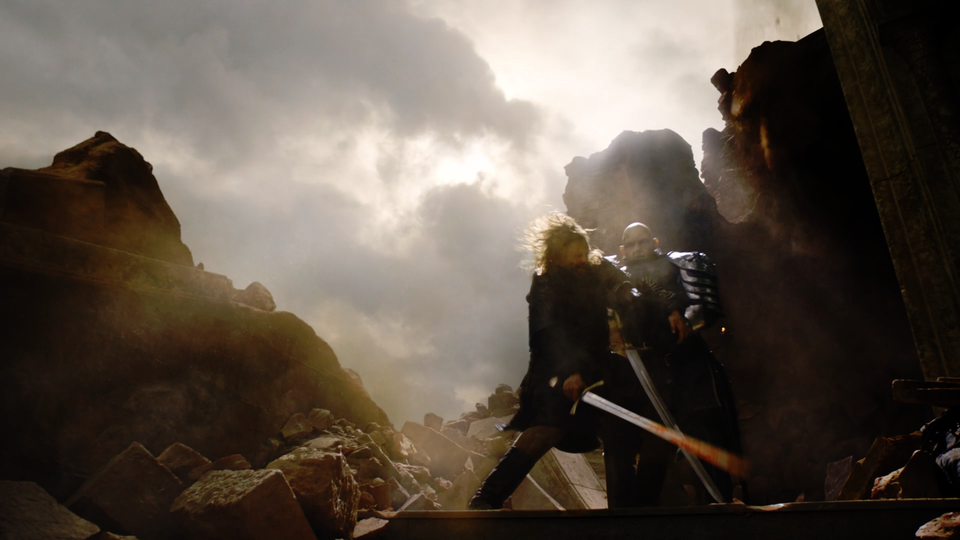 I think this was the shot that stood out most for me: 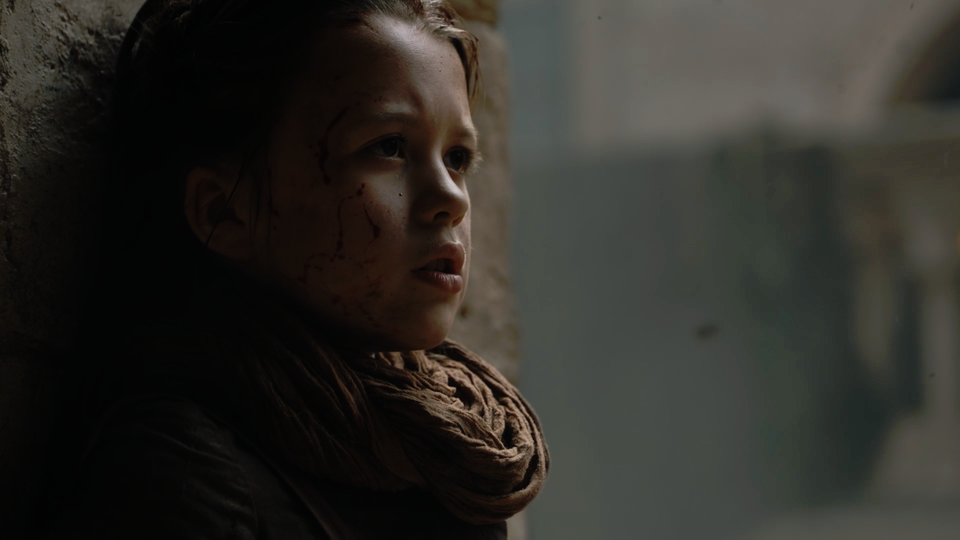 A girl has no name.

A girl with no name, pressed up against a wall, surrounded by fire and bloodshed. This episode, perhaps more than any other, showed us the terror of war and the small folk who endure its hardships and violence.

This is the untold story of Game of Thrones. Perhaps it’s the story that needs to be told. Not a tale of knights and lords and usurpers and Mad Kings and Queens, but the story of the actual human being, the people most affected by war and all this nonsense. Who cares about who sits on the Iron Throne, if all they do is burn the world around them?

Even Arya, the master assassin, found herself adrift amidst the violence. 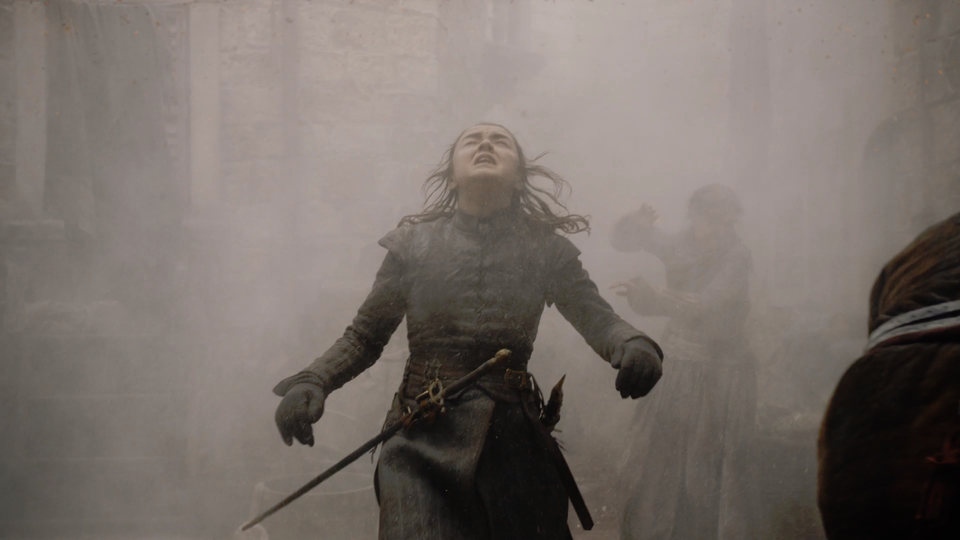 There was so much that I loved about this episode. It was intense, action-packed, filled with drama and surprising twists and turns. The Gold Company was devastated without a word. The Iron Fleet was laid waste so quickly that I question how they did even the slightest damage to Dany just one week ago. It would have been the perfect episode if only they’d built up to it properly. If only we had had a few more episodes. Just like the final showdown with the Night King (which I also loved) if only they had earned it, what a glorious moment that would have been.

But the fact of the matter is, it took several seasons to bring down Tywin Lannister. It took quite a long time to topple Ramsay Bolton. And yet here we are, Cersei and the Night King done away with so quickly it’s almost as if they didn’t matter at all. Now Daenerys is the Mad  Queen and she will either win or lose in just one more episode.

Never have I ever loved something so bittersweet. I loved this episode, but it wasn’t supposed to be this easy–not just for Daenerys and Jon and the victors of this battle, but for any of us. We were supposed to travel to this place in time, this battle of battles, this storm of swords, this dance of dragons. Instead, we fast-traveled. And here we are. 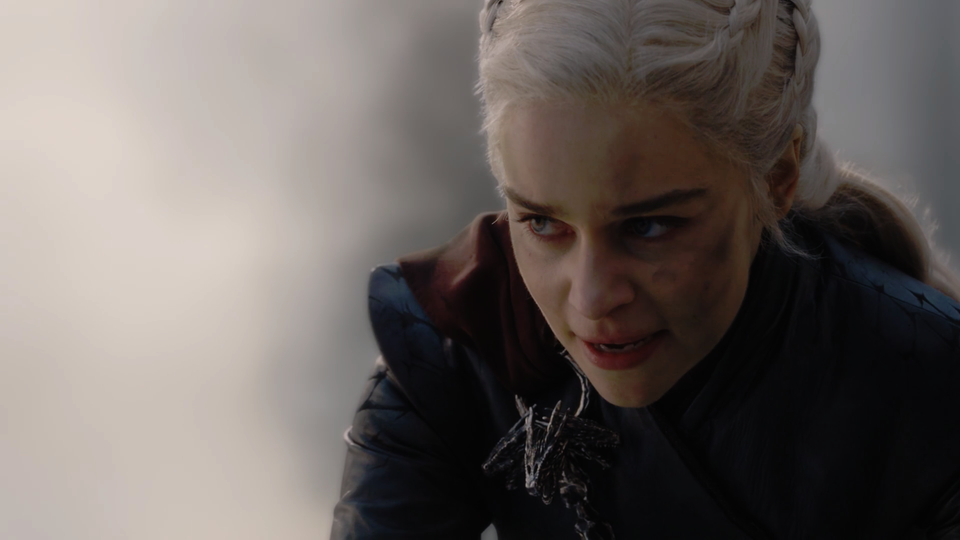 Next week … what should we expect? Jon Snow is obviously disillusioned with his queen. Does he have what it takes to fight back? Will he kill her and take the Iron Throne?

I’ll have much more to say about this episode in the coming days. Like last week and the week before, so much happened in one episode that it absolutely requires a second or third viewing just to fully wrap one’s brain about it. Thank you for bearing with me.