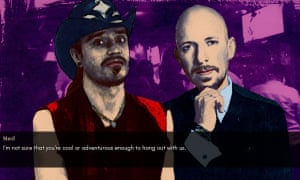 It’s Friday night, and it’s been a long day. You’re a young woman walking into a bar, looking for your friends, when a man you don’t know walks up to you, grabs you, and pulls you close. “SPIN,” he says intensely, turning you in a circle. It’s a command, not a request. When you try to pull away, he feigns sadness for a moment, furrowing his brow, and then declares his love for you, a look of pain in his eyes. “Don’t embarrass me,” the man growls, and tries to pull you towards the door, toward a cab, towards his apartment, even as you resist.

Welcome to The Game: The Game, where a dating sim is transformed into survival horror by filtering “romance” through the lens of “pick-up artists”, a lucrative but emotionally deformed community where poorly adjusted and manipulative men teach others how to extract sex from women at all costs. In a traditional dating sim, you’d be presented with a variety of romantic interests, and encouraged to choose the one you like the most. In The Game, as in pick-up artistry at large, it’s not about what you want; instead, you’re presented with several men willing to do a wide range of things to get you into bed, each of them based on a real-life leader in the seduction community, and tailored to his specific approach.

Created by artist and academic Angela Washko, The Game: The Game drops you smack dab in the middle of numerous highly regimented “seduction” routines, designed to leave you off-balance and less likely to push back against your would-be seducer, as he plays on your insecurities and makes you feel like saying “no” is irrational.

Washko became interested in pick-up artists through her work within the massively multiplayer roleplaying game World of Warcraft, where she facilitated discussions about the poor treatment of female players and how to make the community more welcoming for all. Some of the men she spoke to mentioned pick-up artist books – particularly those by Roosh V (AKA Daryush Valizadeh).

The author of books including Bang Iceland, Bang Poland and Bang Ukraine, which offer advice for men on how to procure sex in various countries through manipulative tactics, Valizadeh once advocated for the legalisation of rape on private property, saying it would make women protect themselves better and be more “responsible” for their behaviour. He later claimed the post was satire, though his books graphically detail situations in which he describes having sex with women who were too intoxicated to consent, unconscious, crying or saying no. “No means no – until it means yes,” wrote Valizadeh. (He has since found God while on mushrooms and, ironically, banned all discussion of casual sex from his forums.)

After examining the texts and practices of the “seduction community,” Washko decided to embark on a deep dive, acquiring the sometimes expensive primary materials and texts of their various systems and mapping their differences. Every quote or interaction you have in The Game with a particular “leader” is drawn directly from their coaching videos, guide books or other primary materials. Some exchanges are recreated word for word. Simply by asking the player to experience them from the point of view of the woman rather than the man, these techniques are instantly transformed from seductive into something more like a nightmare.

If these seduction tactics, which seem designed to achieve consent through persistence and manipulation, seem shocking and disturbing to those only casually aware of the PUA community, Washko says that’s because the most extreme tactics advocated by the scene’s figureheads are typically only visible to those willing to pay hundreds of dollars for their videos, or thousands of dollars for a seminar. “You’re not going to see the bulk of their coaching content for free,” says Washko.

“But after purchasing those materials and watching the primary coaching videos, they were extraordinarily disturbing and incriminating … There’s a shocking amount of behaviour that disregards consent. It’s incredible that these videos have managed to circulate without the degree of scrutiny that they should have, and I think it’s largely because of the paywall.”

As a genre, dating simulators provide a particularly resonant space to explore a transactional view of sex and dating. In most dating sims, the player is presented with a roster of romantic interests, and must tailor their actions or dialogue choices to gain positive responses from their target and win their bodies or hearts. Say or do the right thing, acquire enough points, and you will get what you came for, whether it is sex or love.

This is, self-evidently, not how real life works: games are designed to be won through skill and persistence, whereas human beings are not preprogrammed to satisfy the desires of a random individual who finds them attractive. But Washko says that many leading pickup artists “use video game metaphors for talking about seduction. They break it down to different levels where this or that occurs … and terminology like ‘cracking the code’.” When she interviewed Valizadeh, he described how, if you reach a certain point in the seduction and offend the woman, “You have to actually do a reset. There’s definitely a sense that you just have to put in a certain amount of time and moves in order to get to the next level … and eventually you get what you came for.”

Perceiving any woman as “winnable”, if only sufficient time and coercion are applied – like sexual treasure chests that will always open if you enter the right code or use enough psychological force – is not only dehumanising but dangerous. In this framework, no is not “no”, but rather just another obstacle to be overcome by working on various pressure points of insecurity, humiliation and psychological coercion. After all, if a woman simply isn’t interested in a man who has targeted her for “seduction” – or is even repelled and frightened by him – what does it mean for him to “beat the game” if not pushing her to do something she doesn’t want to do?

The Game: The Game is paired with a tense, minimalist soundtrack by the experimental band Xiu Xiu that evokes a sense of claustrophobia and tacit threat. As various men try to back you into corners, manipulate your body, force you into situations where what you want is of no importance, the music sings with the terror of a clenched muscle.

Washko has played The Game: The Game with numerous testers, and says that some of the most compelling responses have come from men, who come away from the experience saying: “This is a horror game. This is a nightmare. This is terrifying.” Women often had a different perspective, says Washko: “This is my life. This is every day.”